Our 2022 & Visa chaos for India
Whoosh and another year on our world trip from Germany to Japan is over. Incredible, now it's been more than 3 years since we left Germany on our bikes. So we captured our most significant moments of the past 20 countries in this special 4 minute video. By this point we're hitting the streets of Asia with our fully packed travel bikes. Georgia, Armenia, Iran, Pakistan and India - these were the countries, that we connect something special with as well in 2022. Every country in its own way. Either culinary, because of the amazing witnesses with the natives, the incredible landscapes or even total flooding, because of an armed police protection close to the border of Afghanistan or the Visa chaos for India...
At the beginning of the year we still spent a lot of time in our secret favourite country - Georgia! Hardly any other country on our route has so many zigzag lines, circles and other special stuff. Over there we could barely get enough from Khinkali (filled dumplings) and Khachapuri (the best bread topped with cheese in the world). Of course there's also the beautiful nature around the Kaukasus mountains, which also shapes the landscapes of Armenia. The best view on these massive landscapes are found on our YouTube channel VAEGABOND. By the way you can find the latest travel document of our world tour in Season 5: Georgia and Armenia.
After Armenia we went on to Iran. There, the word „chaos on the streets“ got a whole new meaning in Teheran and all of a sudden we could only smile over the traffic chaos in the past big cities. After having seen the beautiful city of Isfahan, we absolutely wanted to the desert, through which we cycled for multiple days - without any water sources or grocery stores around. We challenged the hot desert ride and were rewarded with a unique landscape. The incredible width and a abandoned caravanserai made this stage an unforgettable experience. Another highlight was the persian gulf, where among other things we explored the stunning vulcano island Hormuz, where there was a new surprise waiting for us around every corner. Colorful salt mountains, silver glittering beach next to pink sand, a relaxed athmosphere and tasty seafood. Then came Pakistan, a country, that after 3 years was by far the most adventorous up to this point. On the day of the border crossing we cycled extra fast so we could enter Pakistan before the borders closed. We had already heard of the armed police protection, that would await us, that followed us for around 600km through the entire region of Baluchistan. The reason for the escorts is the sensitive border to Afghanistan and social tensions in the region. We arrived on the Taftan border in time and rolled with our bikes to the pakistani border guards, who we showed our Visa. Then the shock. Invalid! What?

Apparently we were issued only a provisional document, that did not permit us to enter Pakistan. Because of that, our border guard's phone lines started glowing hot, so we could enter Pakistans on the same day. Though, unsuccessfully. Disappointedly, were sent back to the iranian border. The border guard was already awaiting us, I mean it was just before the borders closed and we were the last ones trying to cross. Having just arrived at the gate, we heard a shrill whistle coming from behind us. We were so lucky! We were permitted to enter Pakistan in the last moment! We spent the first night in Pakistan in the police station. For our safety. The next morning we and our bikes were loaded into thousands of different police pick up trucks. Unfortunatly we, as tourists were not allowed to cycle on our own and so we switched the responsibles and the car ca. every 5 to 10 kilometers.

The water switched up and a sandstorm was followed by buckets of rain. We had to spend the second night on the police station as well, when we were woken up in the middle of the night: „Water ist coming“. The police station drowned in a matter of minutes and we had to flee on the roof. The next day we could see the extent of the flooding – standing the water reached our hips and we waded to the next empty road, that was luckily raised. We were accomanpied day and night by police officers for one week, until we realized, that there were even more escort awaiting us outside of Baluchistan. But this time were allowed to roll over the road with out bikes on our own. We were often given fruits and we quickly agreed, that the dried fruits from the north of Pakistan were the best we've ever ate.
On the second highest plateau in the world, the Deosai national park, we not only enjoyed our independency from the police, but also the huge landscape around us, that's also one of the most beautiful, that we've ever come by with our bikes. Here, we met nomadic people and among other things Himalaya brown bears too, that wandered around our tent in the night. Luckily they weren't really interested in us and no incident happened - except that the air got really thin and we actually suffered from mountain sickness on another pass crossing... But that's another story. The stuff that's happened in Pakistan reminded us especially of our daily witnesses with the police in Morocco all around the atlas mountains, but also of the other adventures that we went through there. We actually worked on our first book while we were in Morocco.  „Verreist, verfolgt, verheiratet. Eine abenteuerliche Radreise durch Marokko“ (away, followed, married. An adventurous bike tour through Morocco) was now finally published and is available in different versions (i.a. colored, or as an e book). We are extremly proud and sincerely want to thank everyone, that helped us realize this book project! You can find our first world bike tour on Amazon and in book stores (ISBN 9783756559893). More information under: vaegabond.com/buch
We're now in the 21rst country of our world bike tour, in India. It seems that the past 3 years bike tour over mountains and valley, through the desert, through the snow, against the wind and through continous rain, were the excact right training for India. India is different, India is special. It is chaotic, it is loud, it is dirty, there are no traffic rules except left-hand traffic (if there are, we didn't notice them), it is full of people. It really seems like India has the monopol for the two words „too much“. But when you look behind this smog curtain, you see colorful Saris, laughing faces, amazing dishes, that taste different every 15 kilometers, and diversity in basically everything. We cannot describe it any better. You either like India or you don't. We for our part, feel very comfortable here. One thing we find very stressing though, is the bureaucratic insanity. For example to take a bike with you in a long-distance train or (and especially this) the organisation of the Visa.
Because we came from Pakistan we were only granted 3 months, while other travelers get 6 months or even years (they still have to leave after 90 days, but they can just come back in). After having calculated our budget, we organized a flight and a stay for us for 1 week in Vietnam. For our bikess and the luggage we organized a place in Mumbai. Just before our India visum ran out, everything took a turn again... The flights were suddenly canceled from the airline and we had to quickly come up with an alternative, that ended up being Muskat in Oman. Just arrived, we requested a new Visa for India, that should arrive us after 72 hours of processing time. Totally not! An entire week we shivered. Calling the visa office: unsuccessful, no one called back. Countless E-Mails with a detailed travel course and additional travel data: unsuccessful, no one replied. Contact to the german embassy: atleast someone replied there: still unsuccessful though.. It looked like we were stuck between two countries, because we didn't have a visum for the Oman either (no visum required for up to 14 days). We were just about to loose our minds. The flight was on Sunday and we would've never thought, that we'd open our long awaited papers on Saturday evening in our mailbox (we didn't expect things to go back upwards on the weekend). At the en of the day: we could happily go back to India and spend christmas and new years eve with a friend from Germany as well as Lisa & Dario from Erfahr ung der Welt (experience of the world) on the beach of Goa. We're totally exhausted, but still happy, that the south has so many beautiful and clean beaches. The last days we cycled to the beaches around and there's amazing food here.
We wish you all a successful and healthy start into 2023 and we're already excited, what adventures and witnesses await us this year!

Best wishes from on the way, Melli & Dani 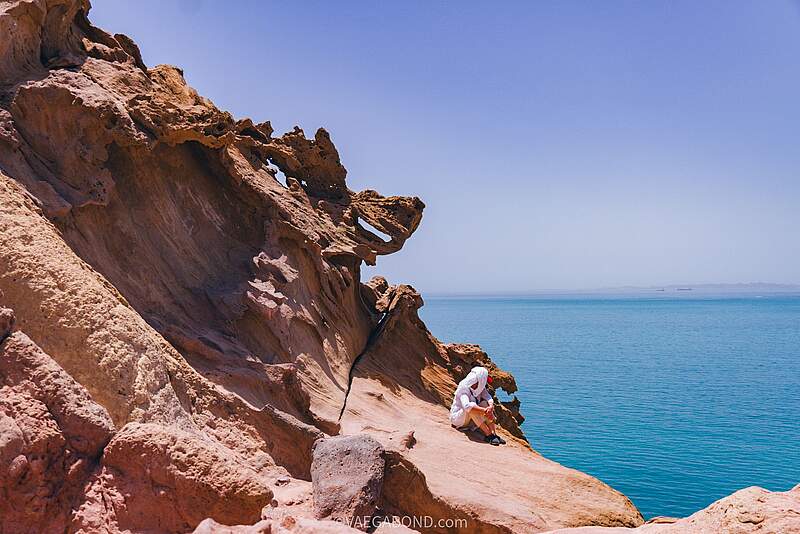 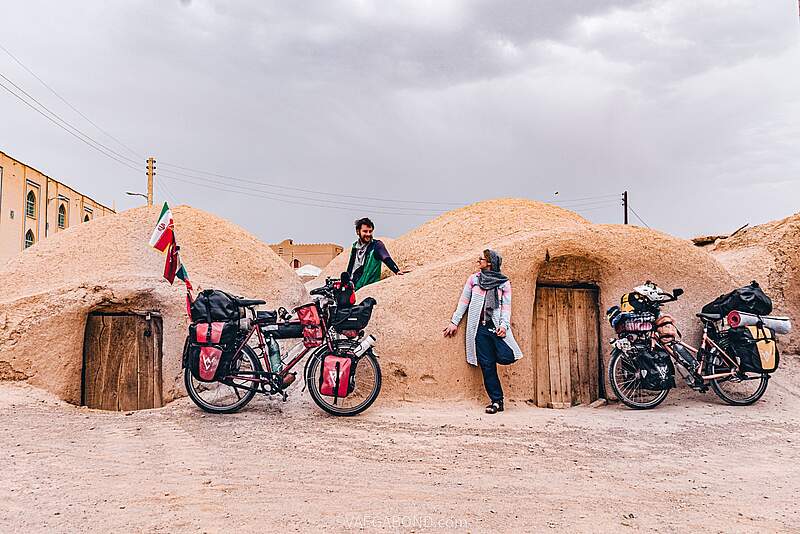 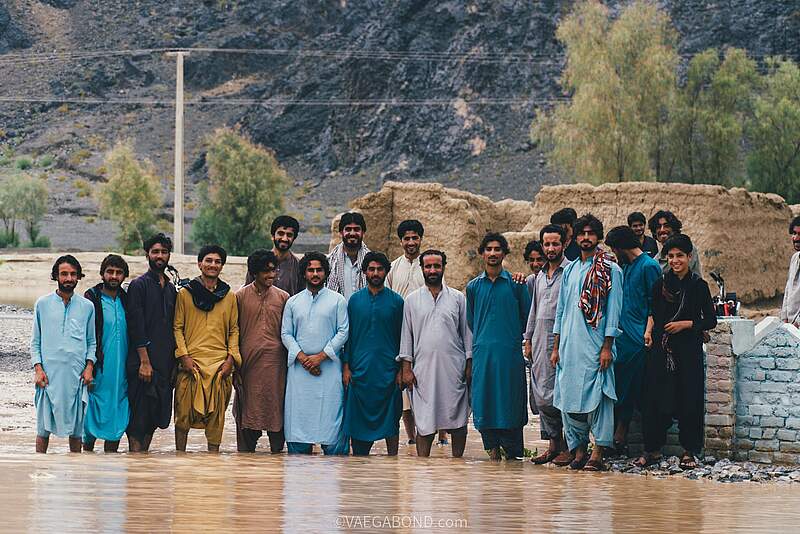 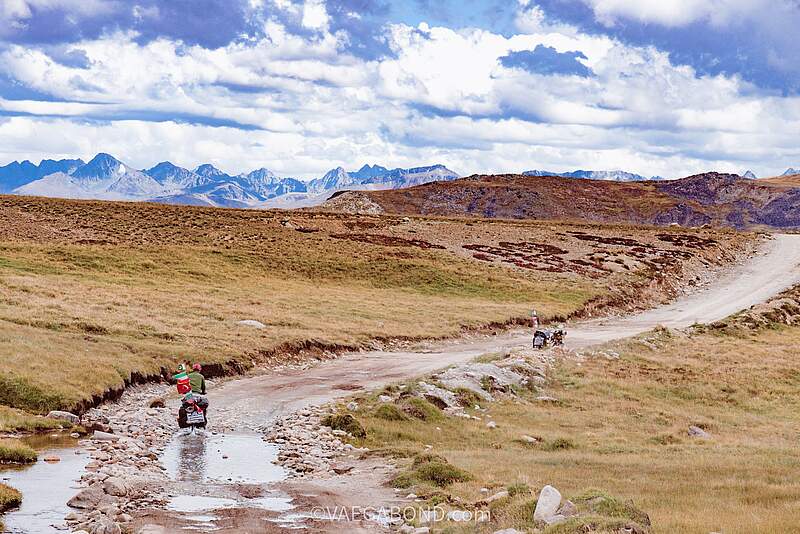 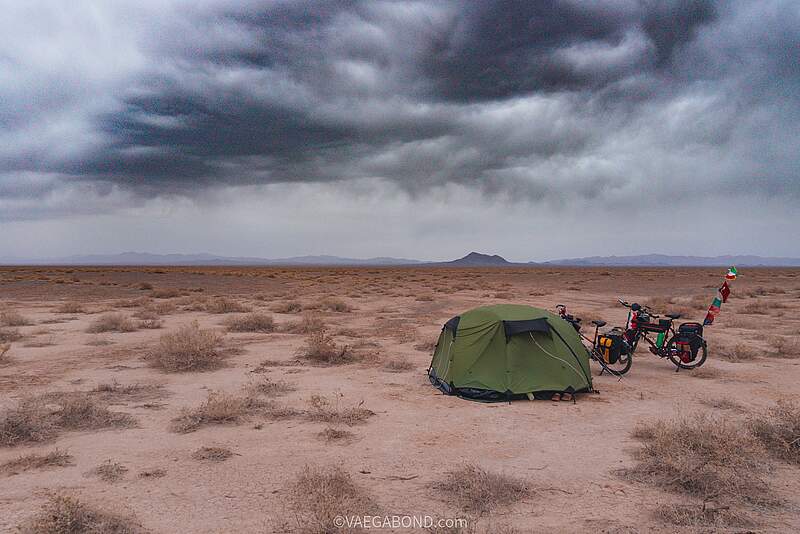 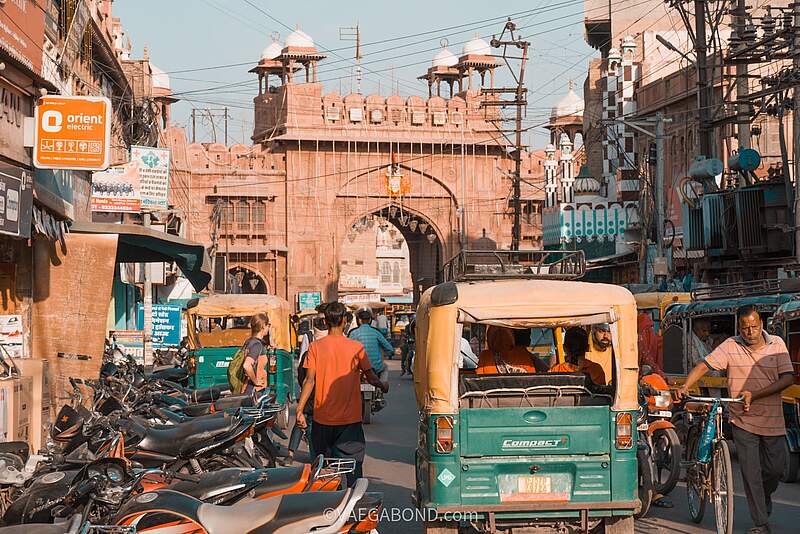 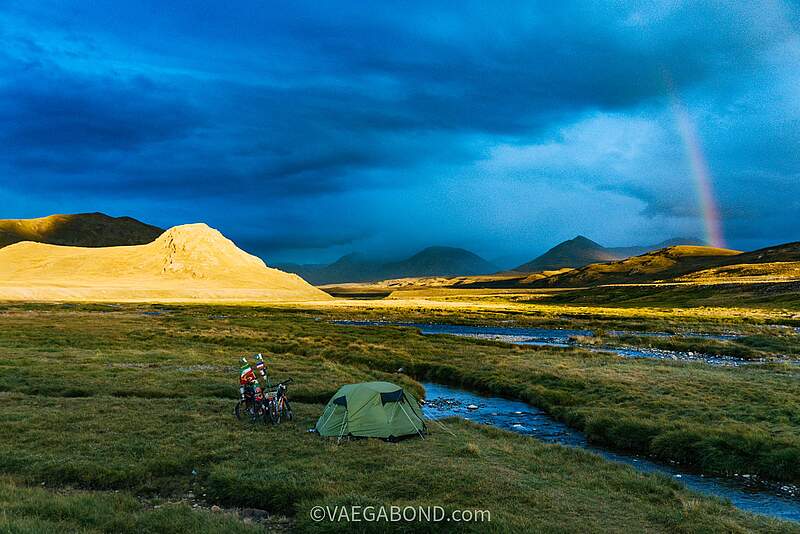 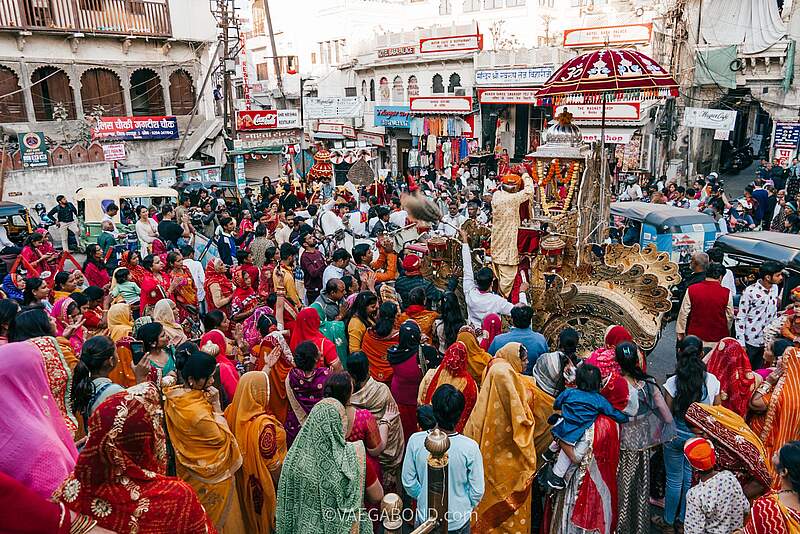 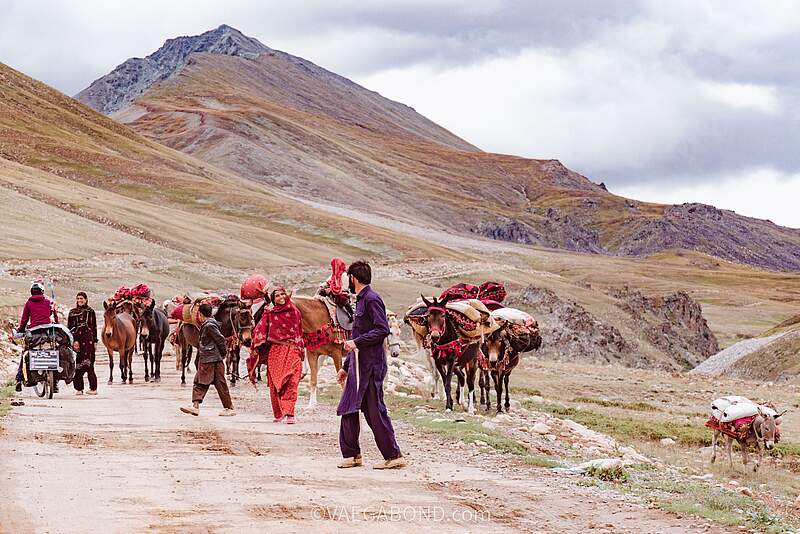 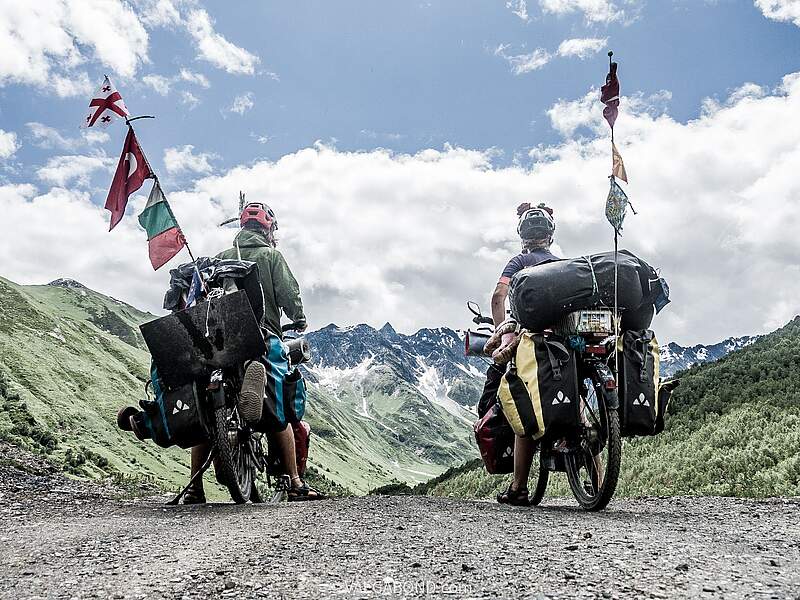 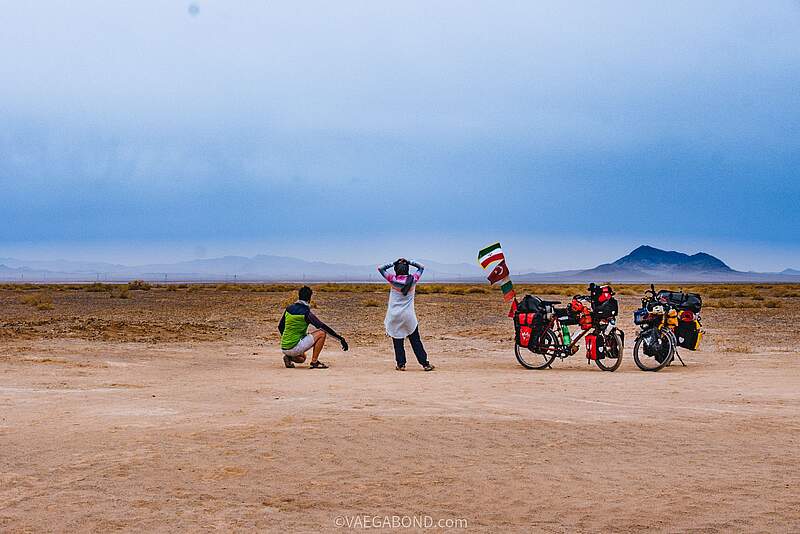 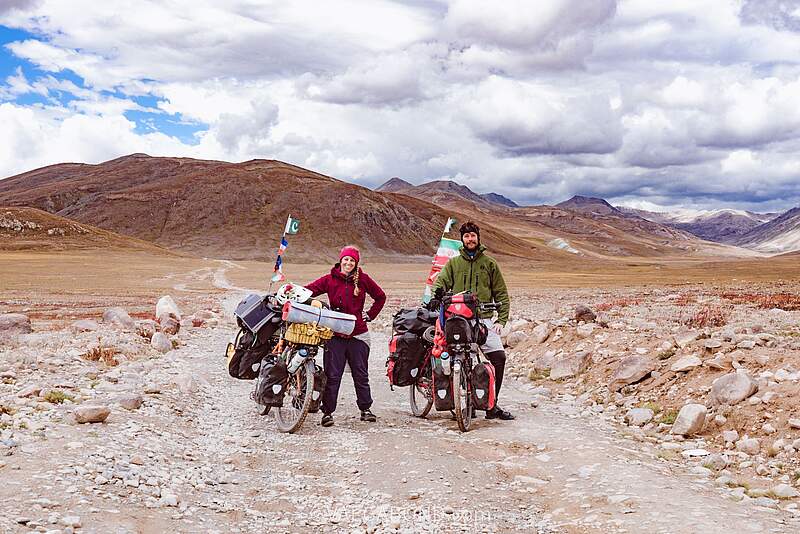