There is no doubt about the Zollernalb belongs to the most beautiful mountain bike areas of Germany. Especially the mountain bike center Albstadt, which calls thousands of bikers each year to the Albstadt LBS Bike Marathon and the GONSO Albstadt MTB Classic  has an excellent reputation as a bicycle sports town. Regularly, thousands of spectators from the whole region are up to watch the sport competitions.

The entire town of Albstadt and surrounding area seems to be infected from the bicycle sport fever. In 2010 and 2011 the venue of the Sparkasse TRANS Zollernalb - as first competition of the MTB stage race and highlight for the region, which leads through the whole area of the Zollernalb -  already casted a spell over thousands of spectators as it did in 2012, too.
At the end of the season the world class mountain bike scene met again:
With the men Christoph Sauser, Alban Lakata, Moritz Milatz, Robert Mennen, Jochen Kaess and many more. With the women: Sabine Spitz, Esther Suess and Borghild Loevset. Next to the named favorites above Ralf Kropp of the SANTOS-Rohloff Team was on the start.

?1st stage Haigerloch - Bad Imnau - Balingen 58,8km/913hm
A fast leading group formed quickly after the start including Ralf Kropp. Together they crossed the finishing line. He came in after 60km with a lag of 14:14 min. to the days champion Moritz Milatz. In the overall standings Kropp lies now at place 56 and end place in the master's 2 assessment.
Kropp's upshot: First day should be the warm up only, but the technical easy and even track is a strain which is not easy to cope with when riding high speed. Pity, it didn't work out for a place on the podium.

2nd stage Balingen - Albstadt 79,4km/1668hm
During the Kings stage Colt and wet weather Made it Hard vor the competitors. The stage was crowned with a hot run over a Ski slope which meanwhile has transformed to a muddy slide due to the rain. Ralf Kropf came in again 4th place in the master's 2 assessment.
Kropp's upshot: On this course I had a weak group in the beginning and had to speed up in order to get along with a faster group. Riding with Sabine Spitz and Esther Suess was better. We could ride at an even fast speed. In the end, I was too exhausted to keep up with this group crossing the finishing line.

?3rd stage Albstadt - Hechingen 77,4km/1216hm
The third stage lead around the Hohenzollern Castle and offered marvelous sights. Kropp finished with a fast group again, so he could gain 4th place once more.
Kropp's upshot: It took a while until I came close to the group around Sabine Spitz and Esther Suess. But then it went fast again to the finish. 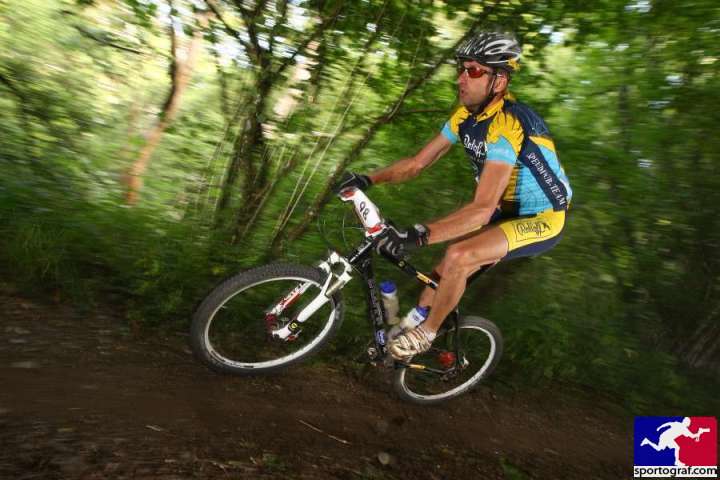