What you can expect to find on this page

A new twist shifter has been available since 2011. Here we write how the assembly worked with the old shifter until 2010.

The assembly of the current twist shifter can be found here. 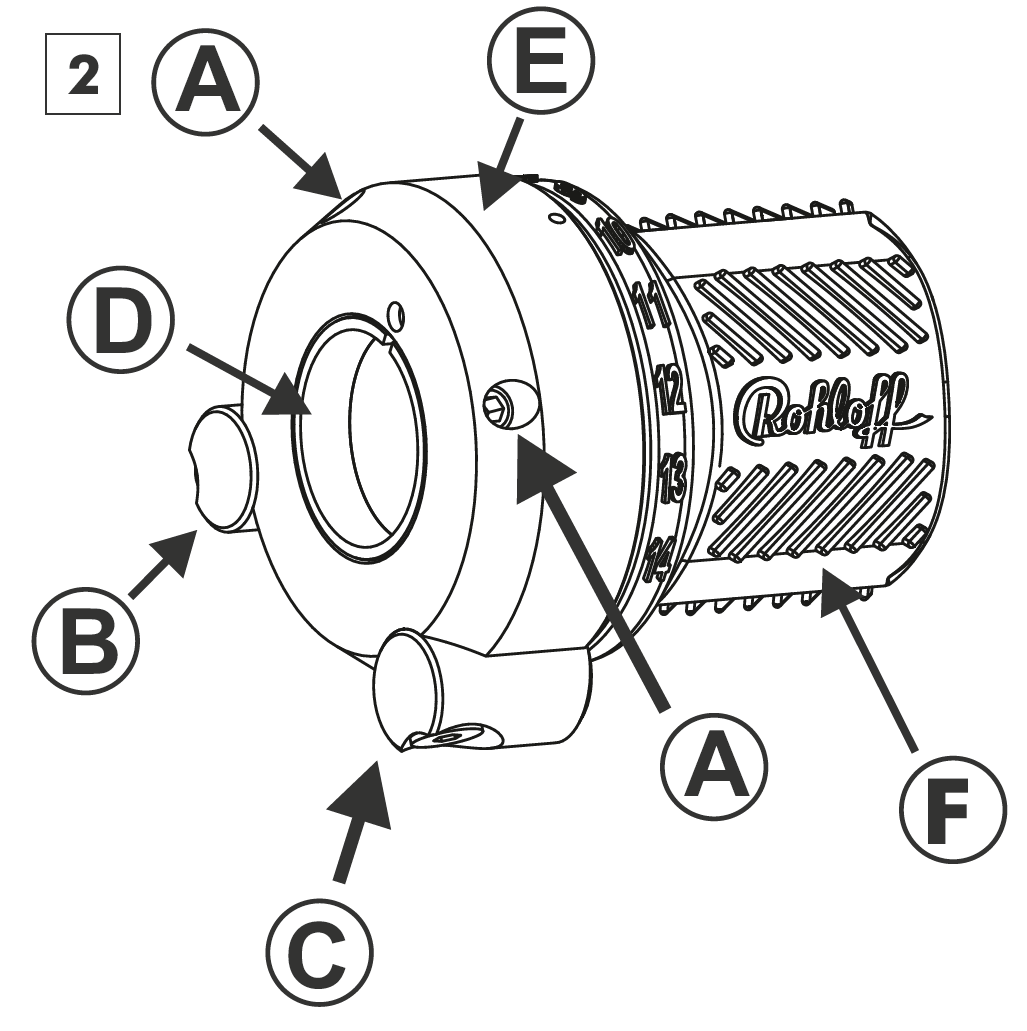 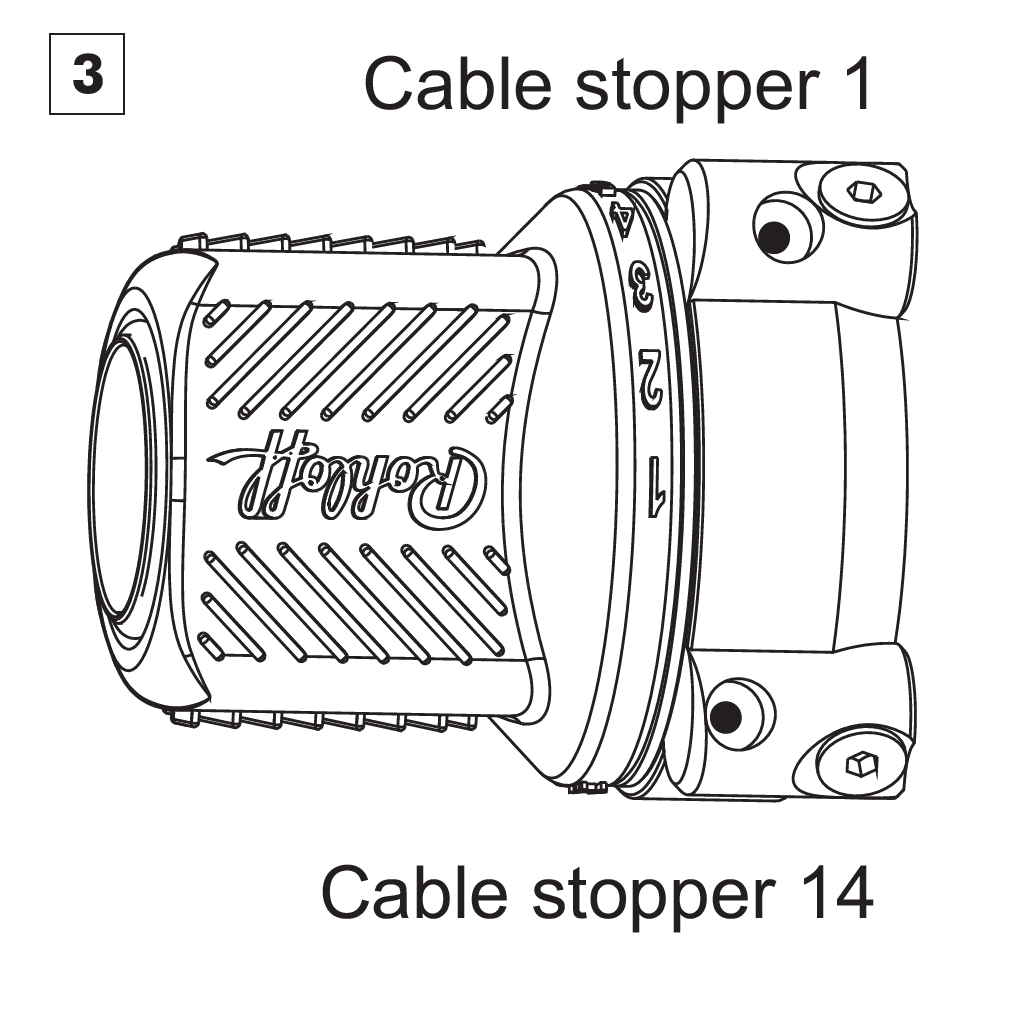 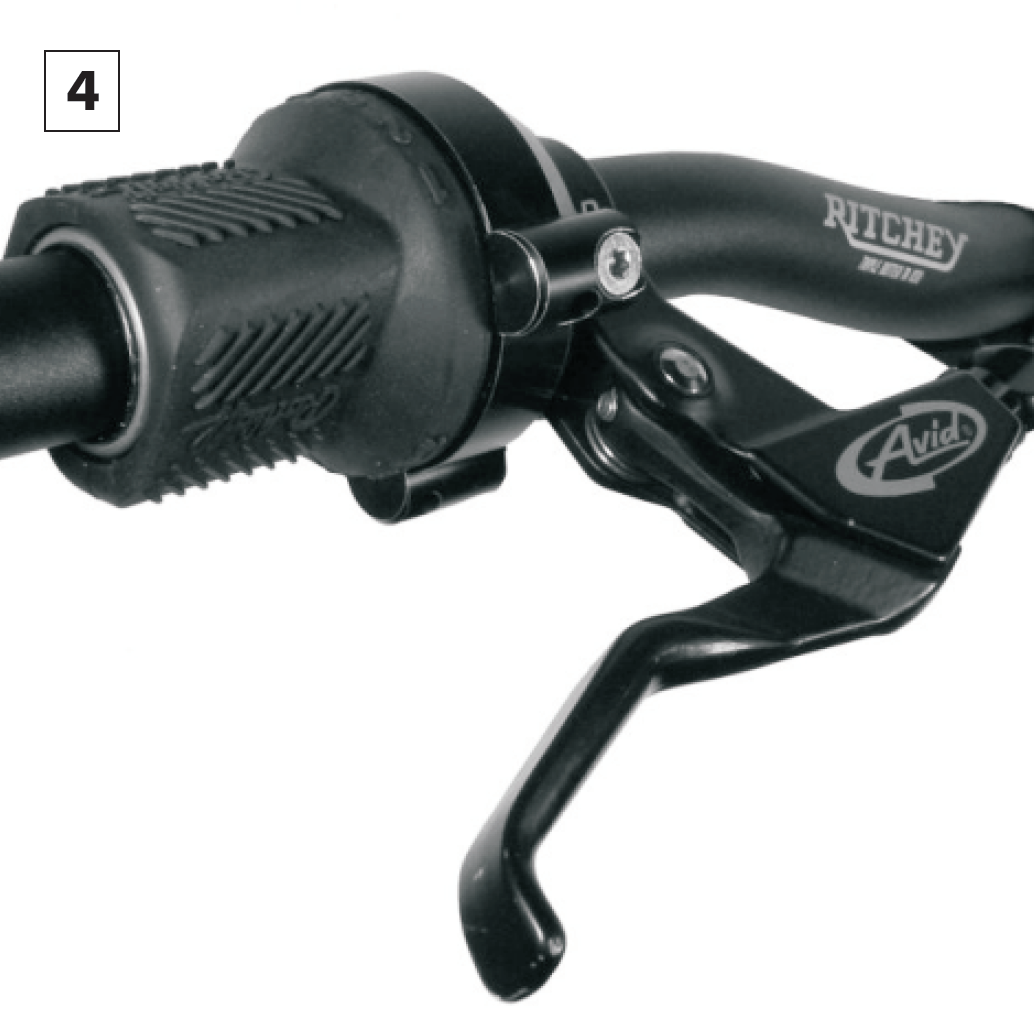 Slide the twist shifter onto the right hand side of the handlebars (diameter 22.0mm - 22.3 mm) and turn the shifter casing, so that the two cable stoppers sit evenly on both sides of the brake lever. 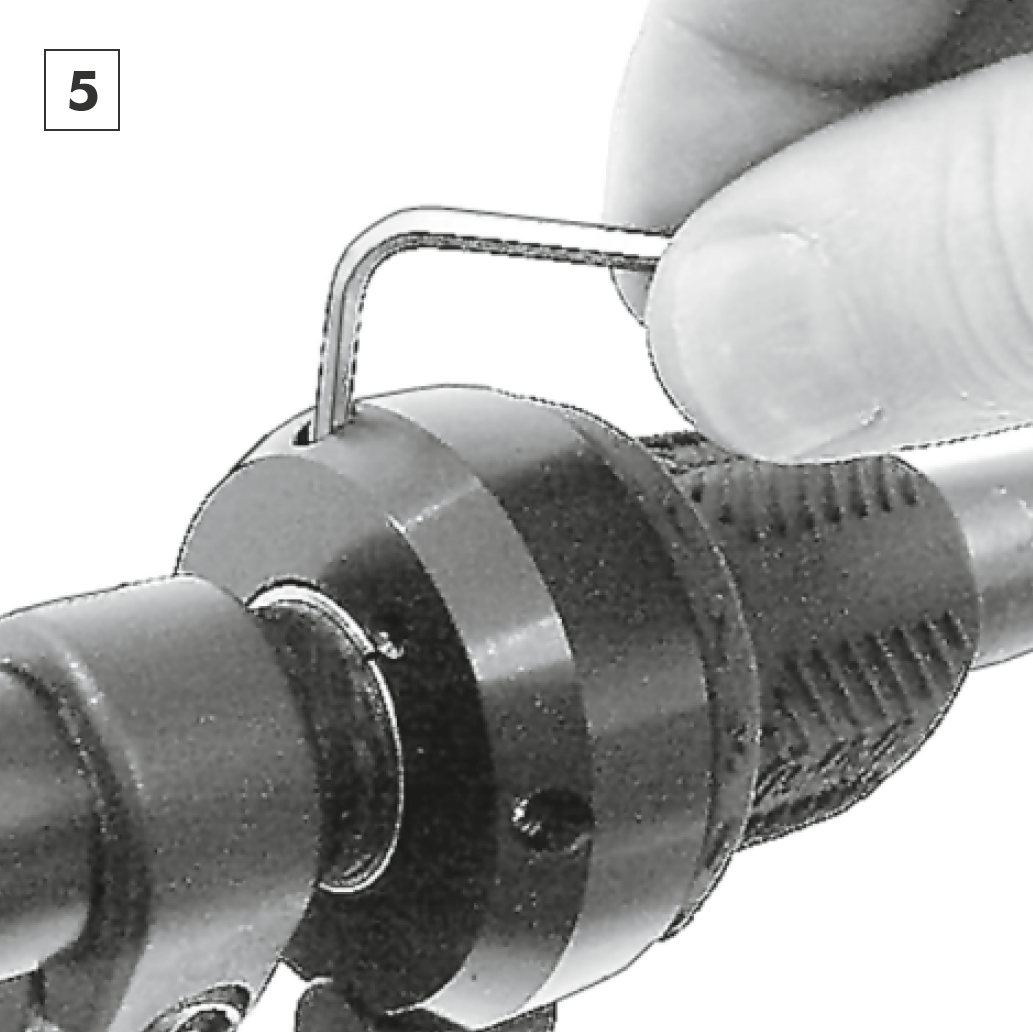 Remove the clamp screws (M5x8 - 2.5mm allen key), lightly grease them and refit them to clamp the twist shifter to the handlebars (tightening torque: 1Nm / 8 in.lbs.). 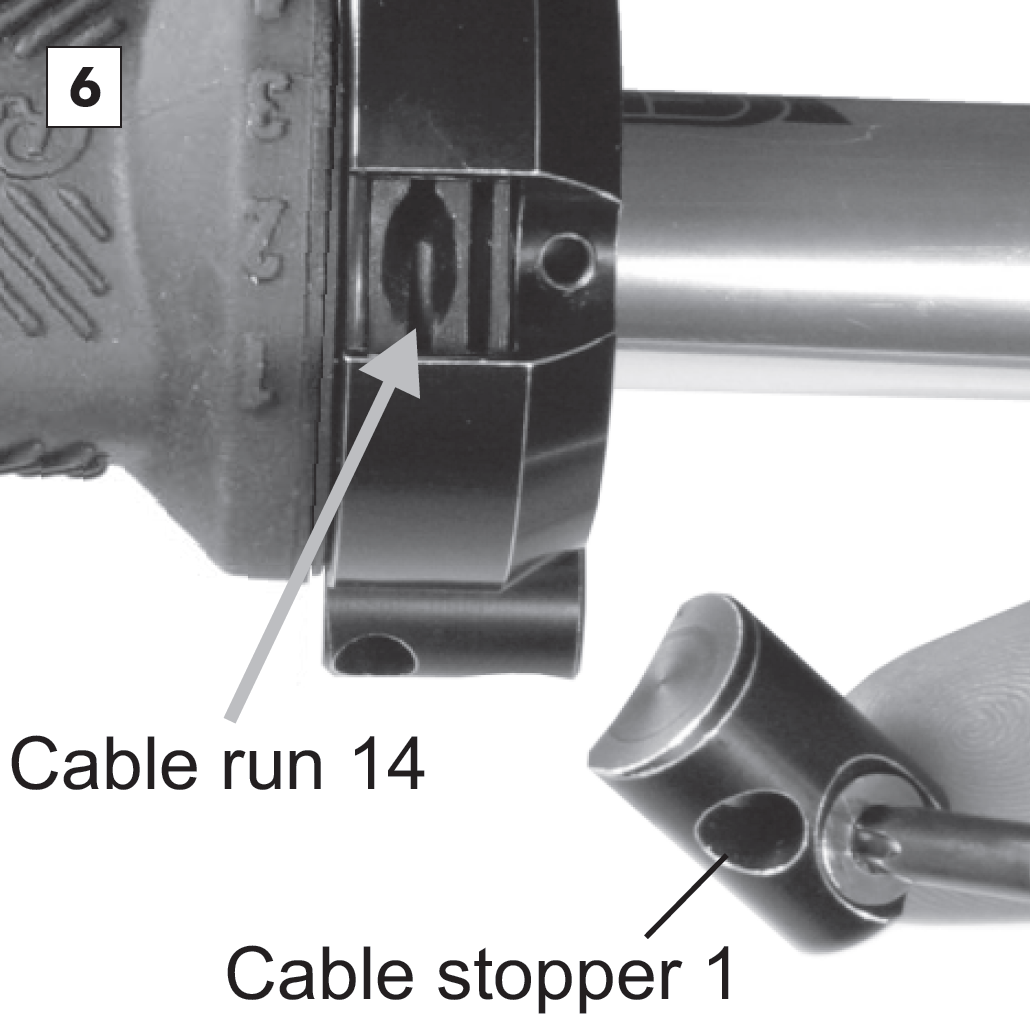 Remove cable stopper 1. Twist the grip rubber, so that the cable nipple seat of cable run 14 becomes visible (at the position of gear #2).

It is possible to mount both of the gear cables through the same hole of one of the cable stoppers. 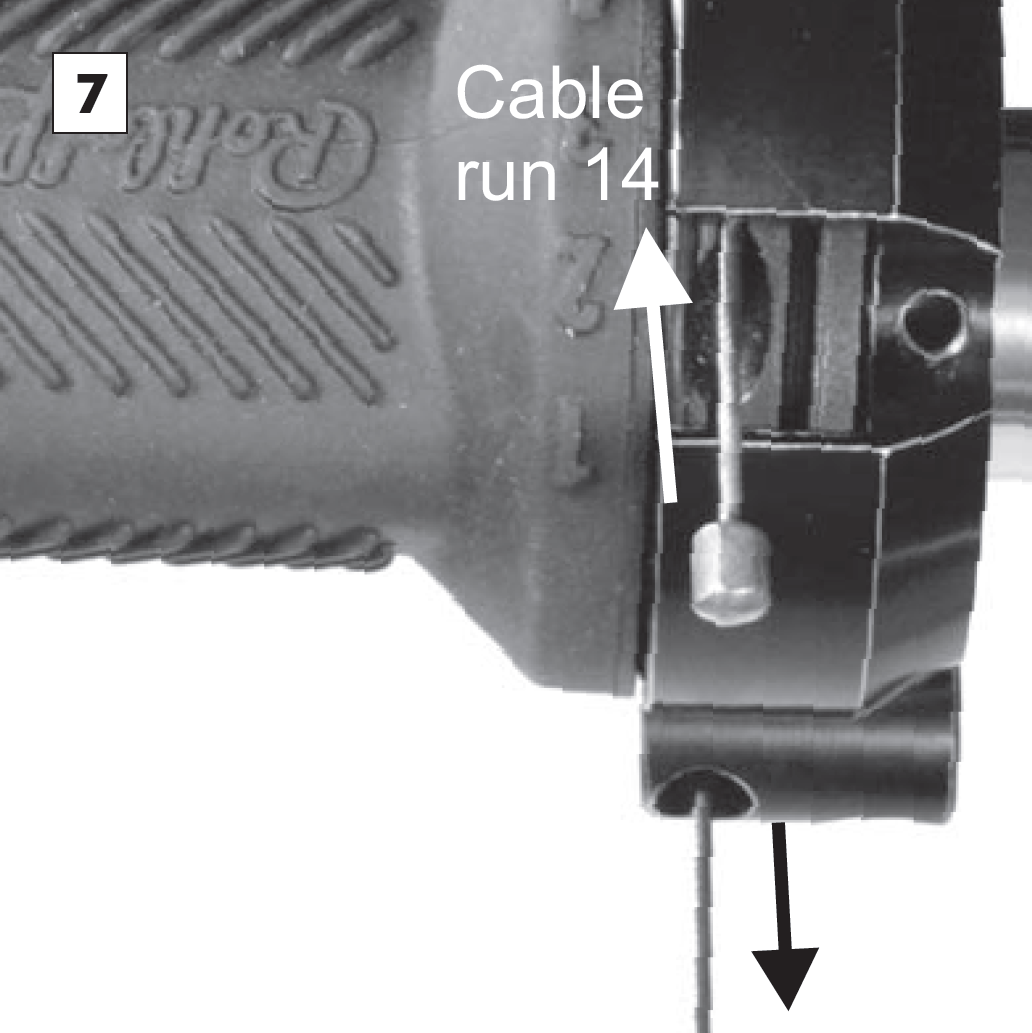 Insert the first shifter cable (shifter cable 14) into cable run 14 from below until cable appears out of cable stopper 14. Pull the cable until the nipple sits firmly in the cable nipple seat. 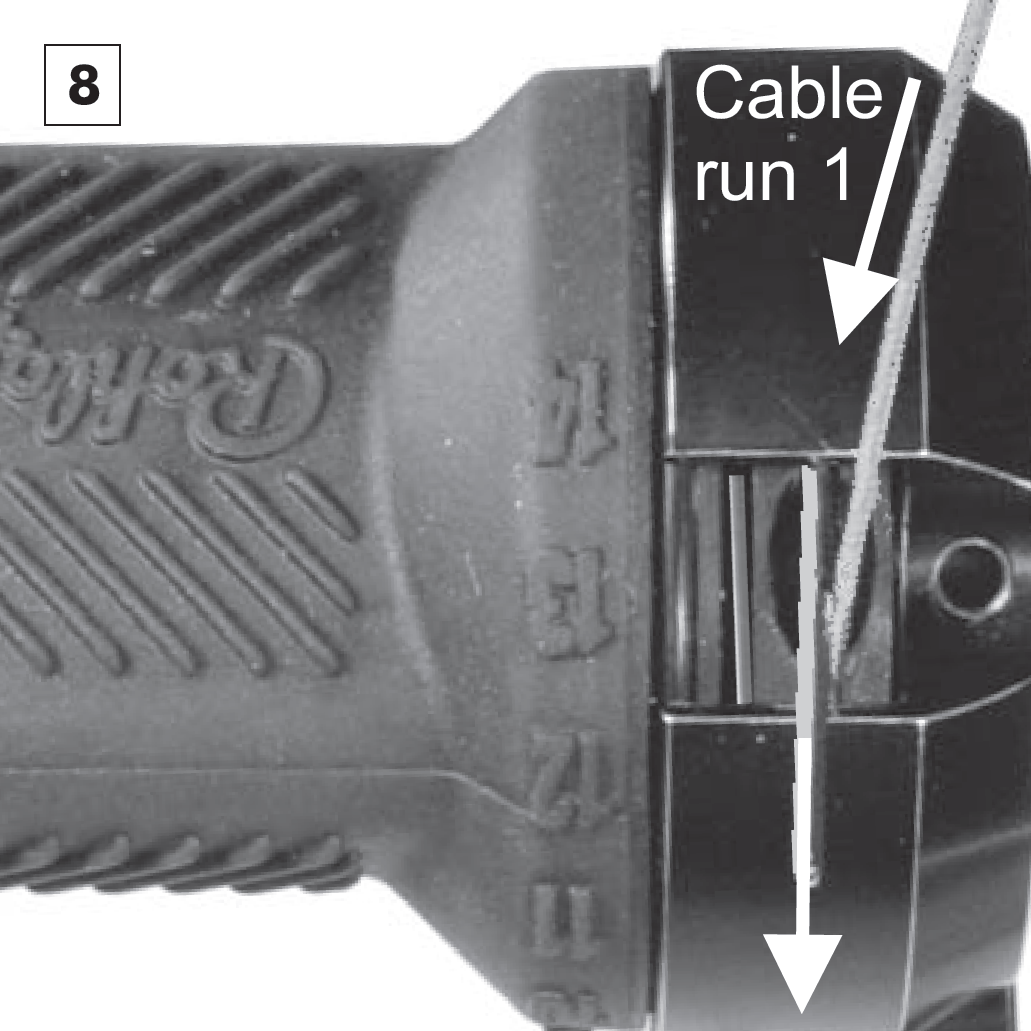 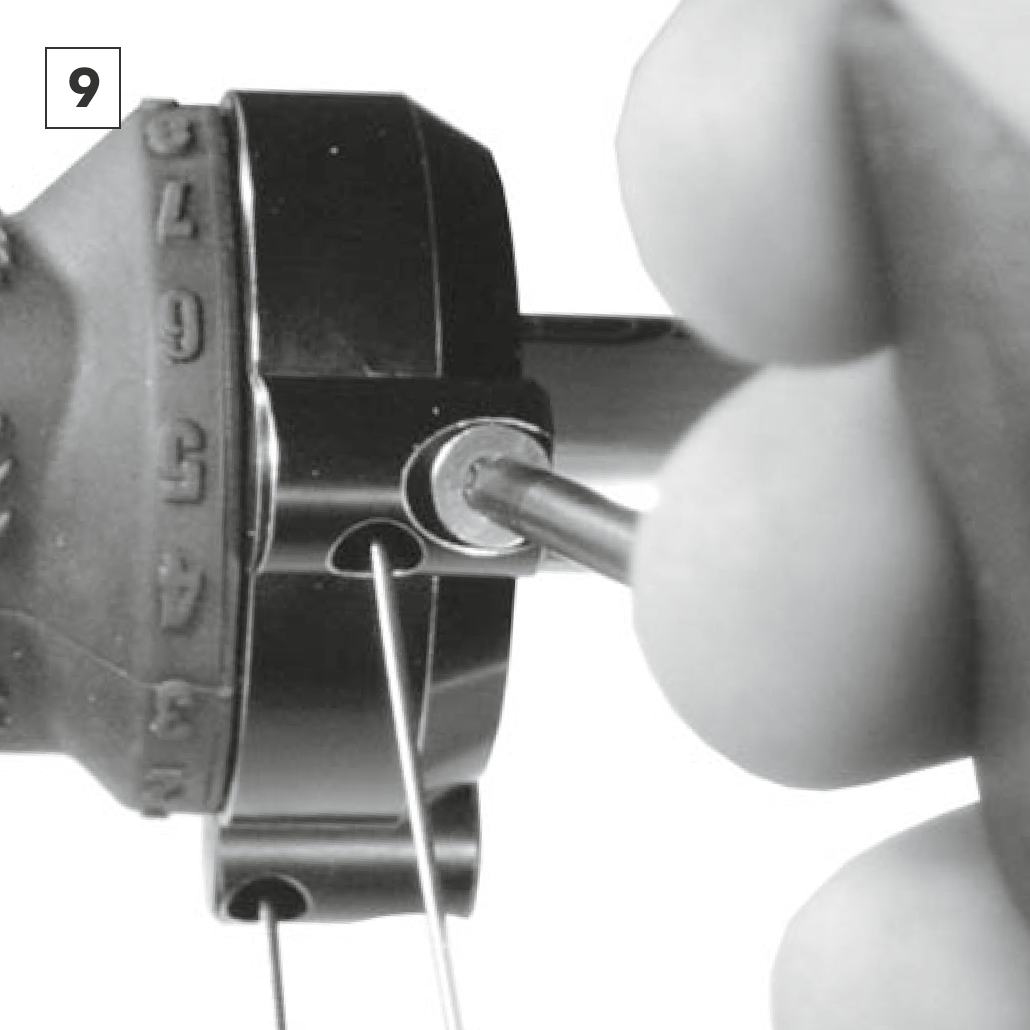 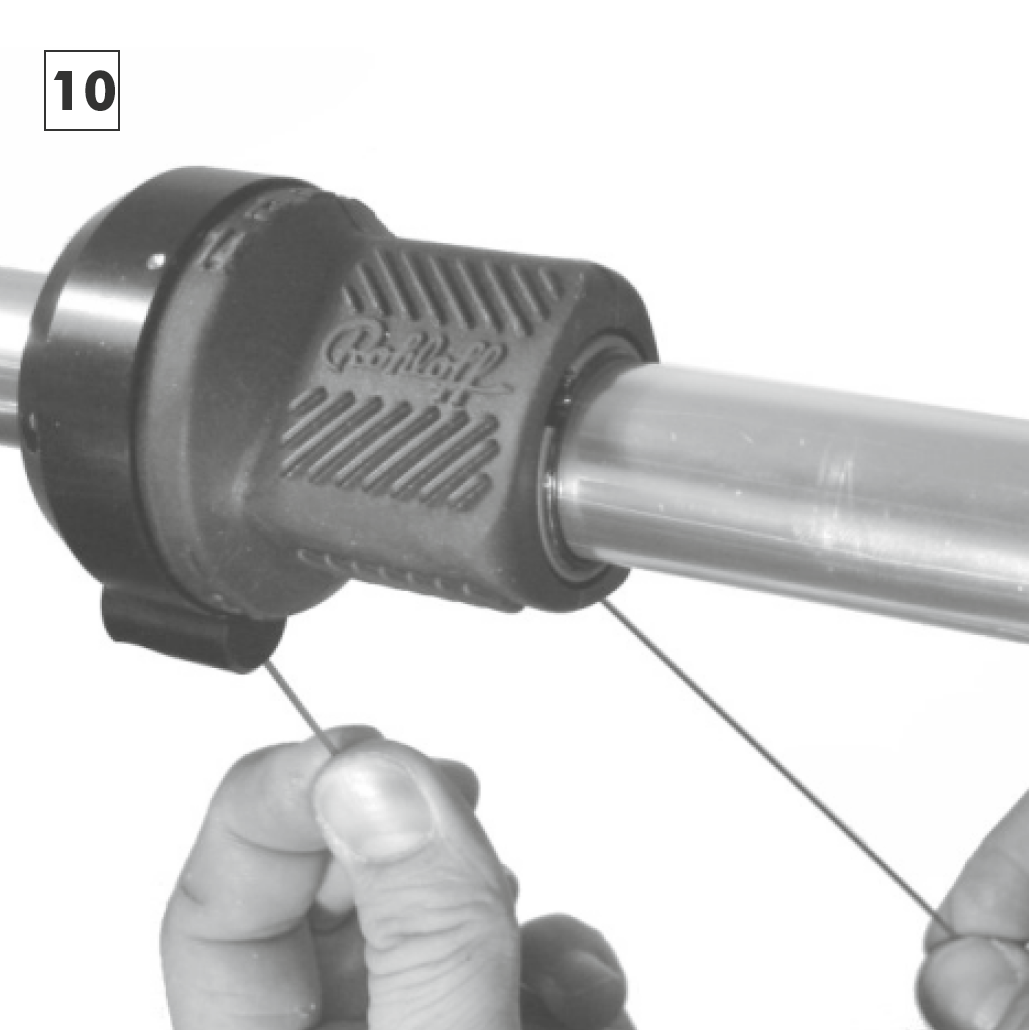 Now control that the twist shifter rotates freely by grabbing both shifter cables and pulling them in turn, so that the grip rubber rotates from just before the number 1 to just past number 14. 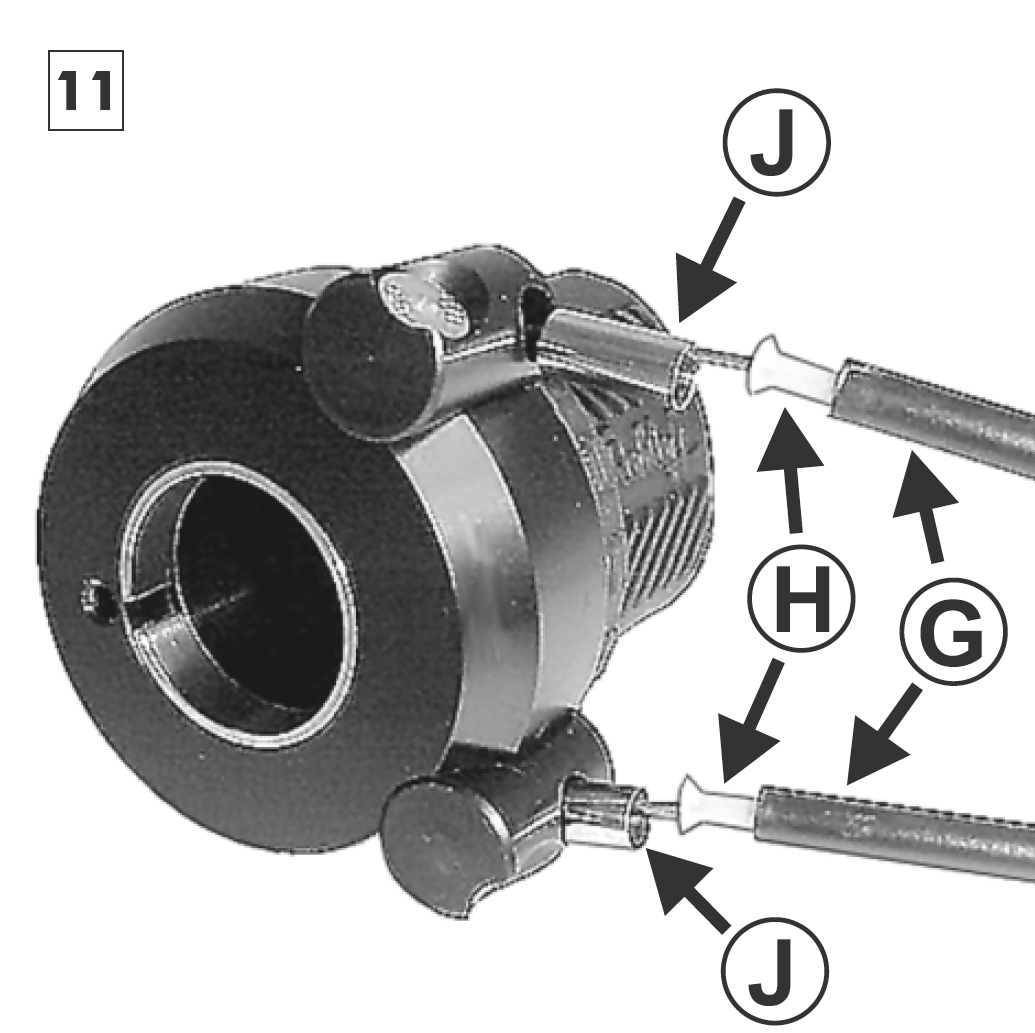 The flaired end to the liners H must be mounted between the cable housing G and the housing caps J at the twist shifter. This is important to prevent the liner from being pulled into the cable run itself 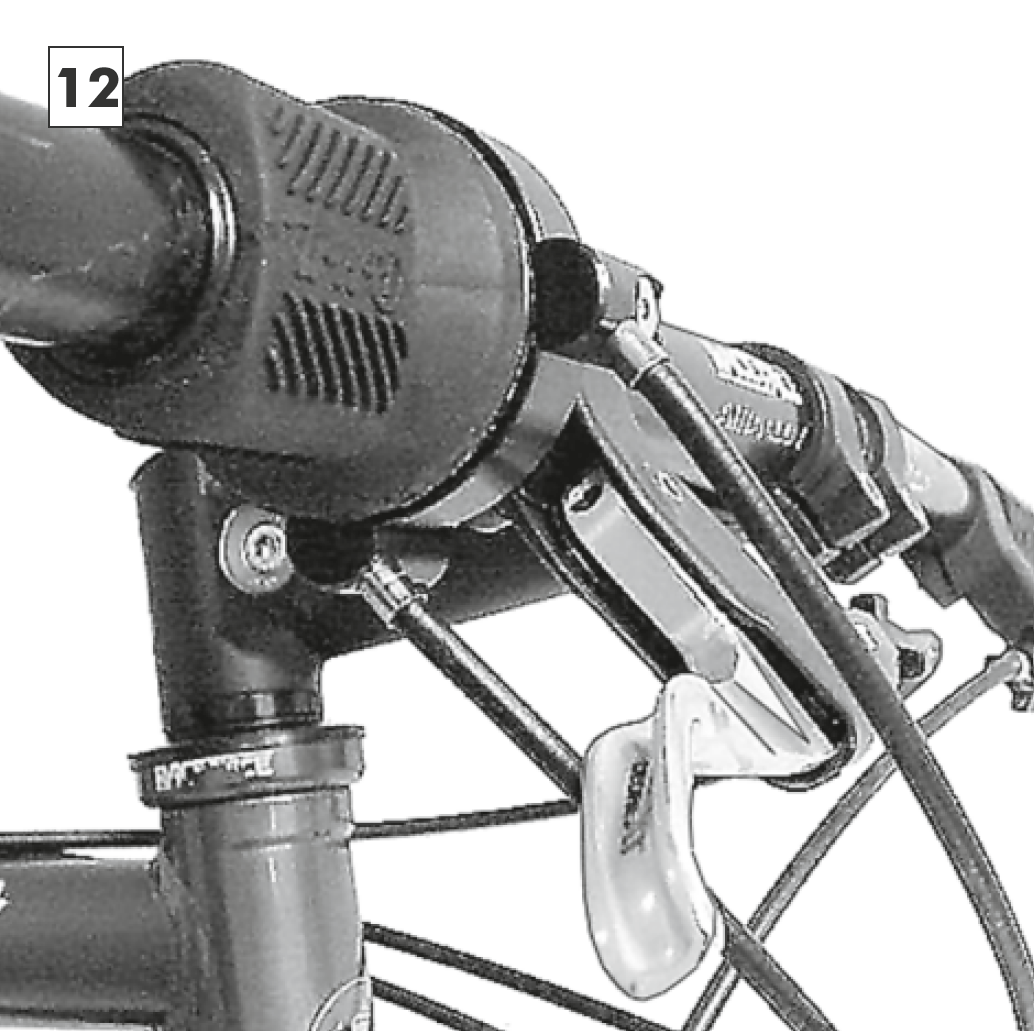 Mount the cables dry, without the use of grease or oil.

The shifter cables have to be removed from the twist shifter first before it is possible to replace the rubber grip. Before the shifter cables are removed, the ends that were clamped in the female connectors (internal gear mech) or the cable pulley (external gear mech) must be cut so that the frayed ends of these cables do not damage the nylon liners when being removed. 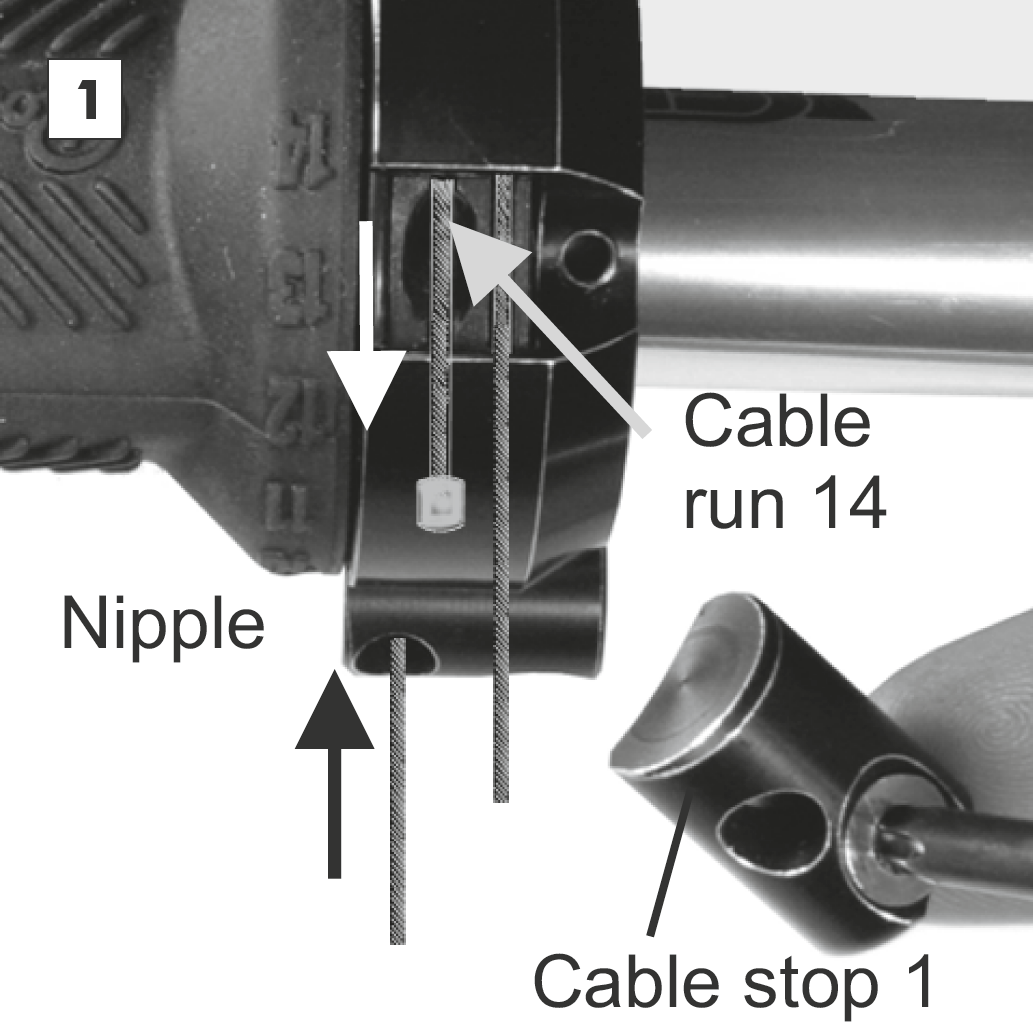 With a flat screwdriver, remove the safety ring. The rubber grip can now be removed. Clean the twist shifter housing. 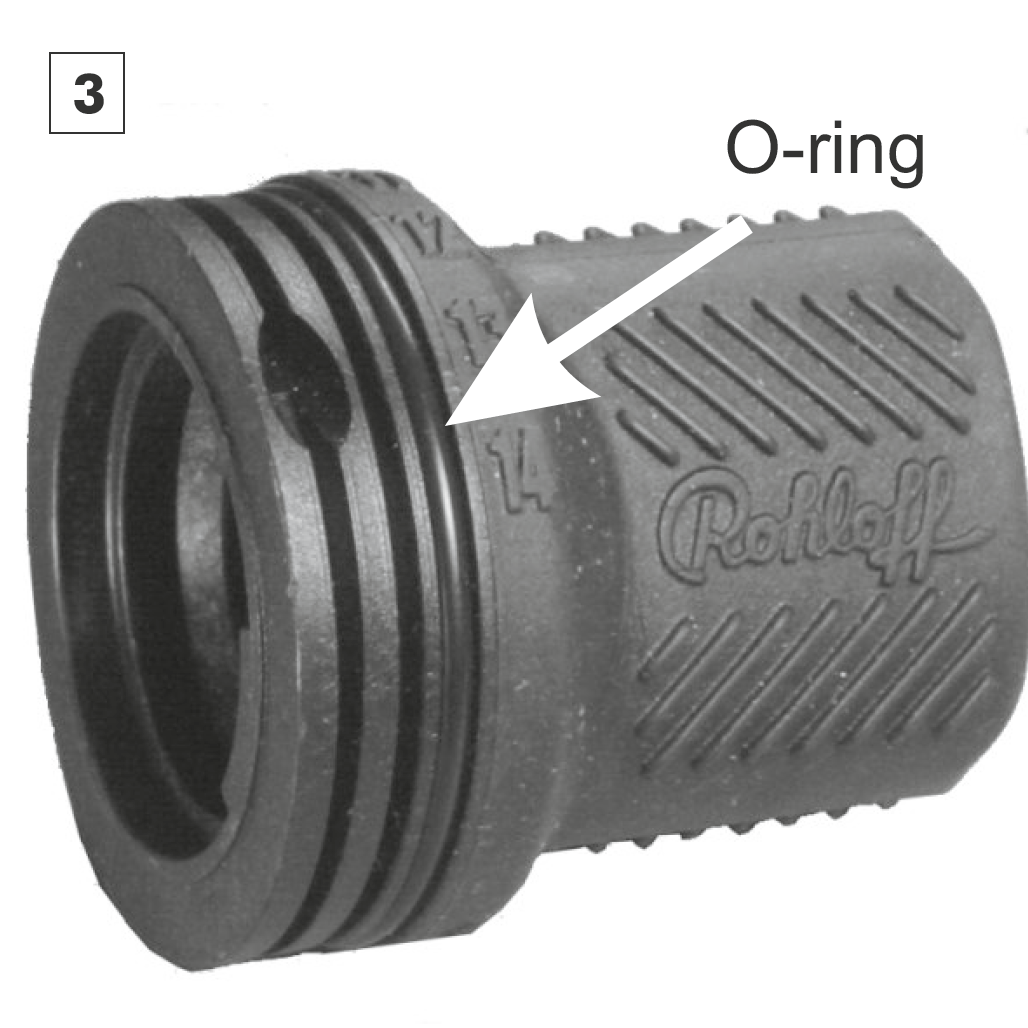 Lightly grease the twist shifter housing. The arrowed “O  ring” must also be lightly greased and checked that it is sitting in the correct position before remounting 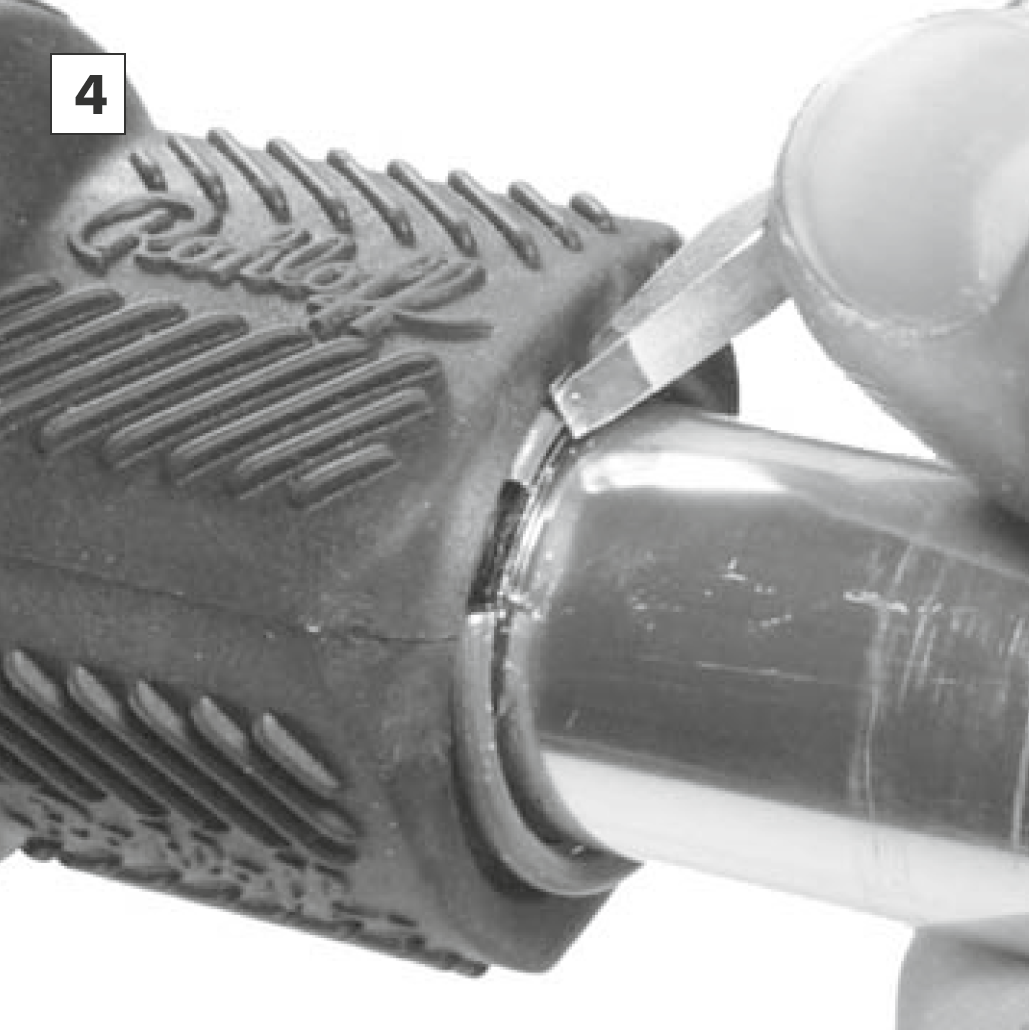 Should only the rubber grip need to be replaced. Firstly shift into gear #14. Disconnect the Bayonet Connectors or the External cable box. Screw both of the cable adjusters completely in and remove the two screws on the cable stops of the shifter. Remove the safety circlip and slide the complete rubber grip out of the shifter housing and off of the handlebars. Hook both the cables out of their seats in the rubber grip, transfer these and re-hook them into the new, lightly greased rubber grip (Art.N° 8201). Wind these cables roughly 3/4 (270°) around the new grip in their respective runs and slide this new complete unit back inside the shifter housing and refit both of the cable stops. Replace the safety circlip and lightly test the shifter functions correctly. Reconnect the Gear mech in gear #14.