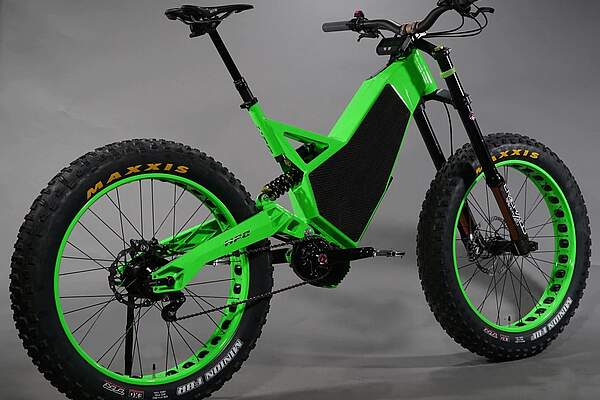 The Revolution AT was developed to be the ultimate backcountry exploration bike in a class that has never existed until now; Downhill Fatbike. The Revolution AT’s standard 4.8” Maxxis Minion tires offer unparalleled floatation and traction in even the softest conditions, all without sacrificing suspension travel or terrainability. The internally geared 14 speed Rohloff Speedhub, with an impressive 526% gear ratio, gives the AT tremendous hill climbing torque and blistering speeds in one robust package. Top speed (3000W version) in the lowest gear varies from 9 mph to over 45 mph in the highest gear!

No expenses were spared in creating the ultimate offroad exploration ebike, from its all aluminum 6061-T6 body, fully CNC’d swingarm, to the custom DVO factory tuned FAT suspension responsible for dampening the Revolution AT’s 9 inches of progressive rate frame travel! Add to the mix a powerful 3000W capable mid drive and 12” of ground clearance and you get an e-bike that can truly conquer ALL TERRAIN!